So earlier this week I posted a plant availability graphic and realized today that I didn’t include PAW PAW!

I have, for sale, about 10, 1 year old PawPaw trees. They are  in pots and I know that summer will not be kind to them, so in an effort to sell them quickly to good homes I am releasing them to the public for 10.00 a piece. 2 for $15.  Community gardens, get in touch, it’s possible I’ll just let you have them for free! I also can part with a few already stratified seeds for anyone who is interested.

These trees are fantastic for the small, home-grower. Reaching an average height of about 25 feet, PawPaw is a tropical fruit cousin which is native to the temperate forests of the Northeast United States, extending out to the midwest, east of the Mississippi. Local culture has latched on to the PawPaw in various ways, most notably, the PawPaw festival in Ohio which has been going on for decades now!!

The PawPaw seeds I sprouted were given to me by my good friend and soul sister, who uses only organic practices (same as me–like I said, soul sister). She grows in South Jersey too…so these trees would be extra-acclimated to the environs of Cumberland and possibly Atlantic counties. They ripen in September.

So why do you want a PawPaw?? Well, it bears repeating that this tree stays a manageable size. Despite that, the fruits are the largest of any Native fruit tree. Slightly larger than palm sized, they always reminded me of the Ataulfo mangoes in shape/size. Texture also, is reminiscent of a mango. Though instead of one fibrous seed-pod-thingy in the middle there are 3, or likely more, lima bean sized, brown seeds. For me, this makes the PawPaw easier to prepare than Mango. The inside is sweet and custardy, and has that banana-mango-tropical taste that we’ve come to associate with some of our South American favorites.

Another reason I like PawPaws goes back to their being native. Seriously. I just left 10 of them out in pots through a Northeast winter (okay, yes, it WAS a mild winter…but still!) and they were fine! They’re not asking for any special treatment. They don’t need pruning. They’re not susceptible to too many diseases.They grow naturally in forests all around, with no human intervention.  I mean the ease of care here is beginner-level, for sure.

The hard thing about PawPaw?  Germinating those seeds!! They need a period of cold strat, for like two months!! And even then germination is spotty. Also they’re persnickety when it comes to their root structure. Transplanting them from the wild very often just does not work. That is because PawPaws create extensive root systems like runners beneath the ground. Severing one from it’s familial network, which it relies on for much of it’s resources, it very likely to result in death.

If you would like to purchase a PawPaw get in touch. I can be reached at 856-455-2294 (It’s a home phone # so don’t expect a receptionist-like greeting) or email at thegreatfullgarden@gmail.com. 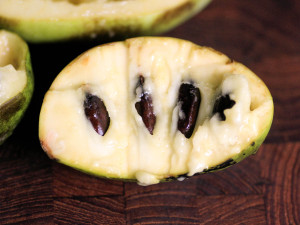 The inside of a paw-paw fruit. I lifted this photo off the blog Serious Eats, which credits the photo to Samara Linnell.  The blog post is excellent and gives lots of uses for PawPaw fruit!!   Serious Eats blog post on PawPaw.